GIGABYTE kicked off their second competition of the 2018 OC Season here on OC-ESPORTS in March with the GIGABYTE AORUS MARCH OC MADNESS 2018 contest. With a little less than 5 days left, it’s time take a quick look at the current leaders, the CPUs and boards being used, the scoring and of course the great prizes up for grabs.

Running throughout the month of March 2018, the contest allows overclockers to use any Intel processor with 6 or less physical cores (disabled cores not allowed). However, to create a more level playing field, processors cannot use CPU core or cache frequencies above 5GHz. Contestants must use a GIGABYTE / AORUS motherboard and submit using the contest wallpaper to ensure only fresh submissions count. The contest spans three separate stages each starting and ending on a different date to keep interest levels peaked throughout. Let’s take a look at the stages to get a snapshot of who looks in the frame for some great hardware prizes from GIGABYTE.

In Stage 1 we find Nik (Germany) at the top of the table with a leading XTU score of 2,822 marks. He used a hexa-core Coffee Lake Intel Core i7 8700K running at 5Ghz, a GIGABYTE Z370N WIFI and Corsair DDR4 memory. 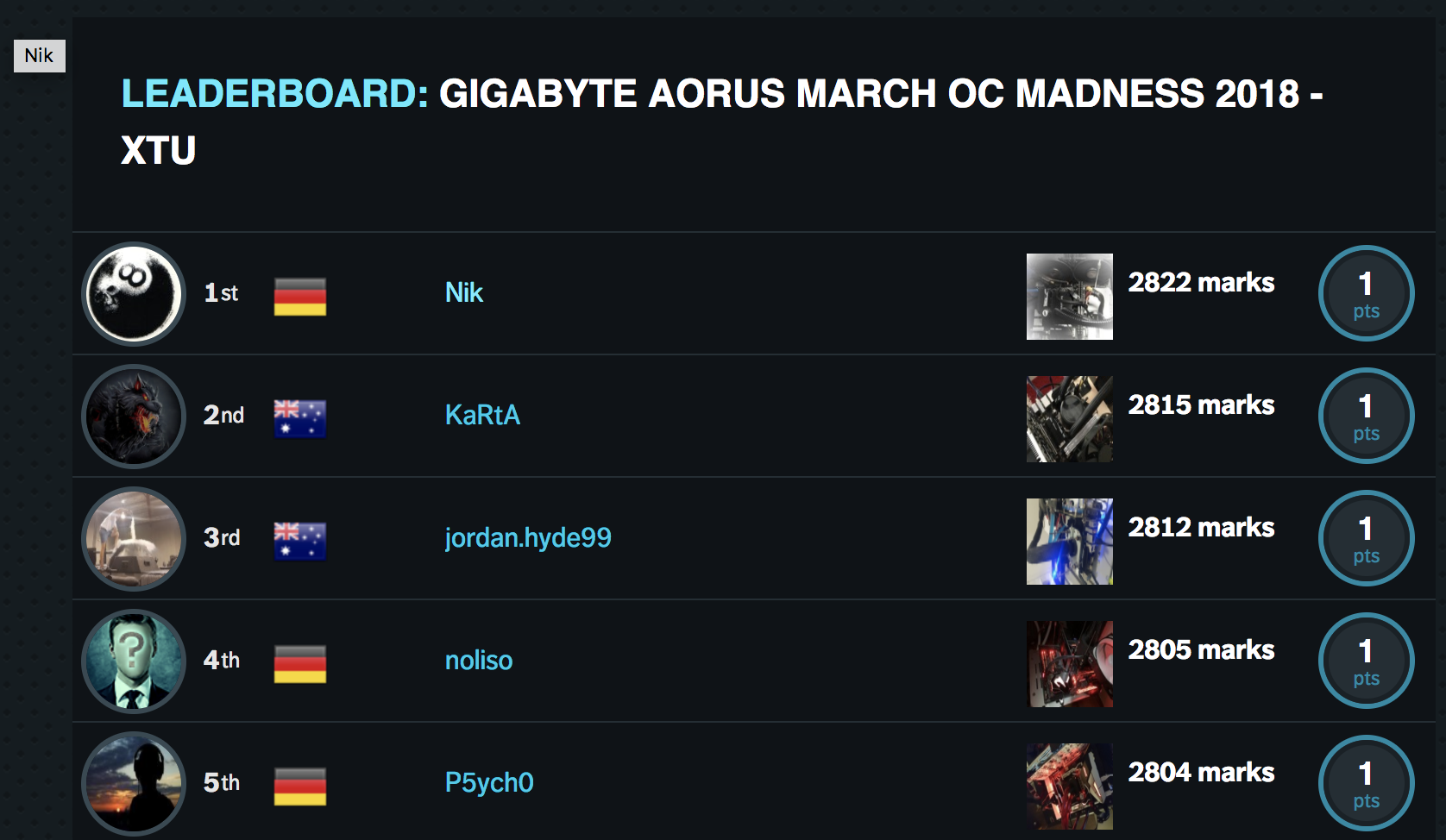 Here’s a shot of the rig used by Nik. 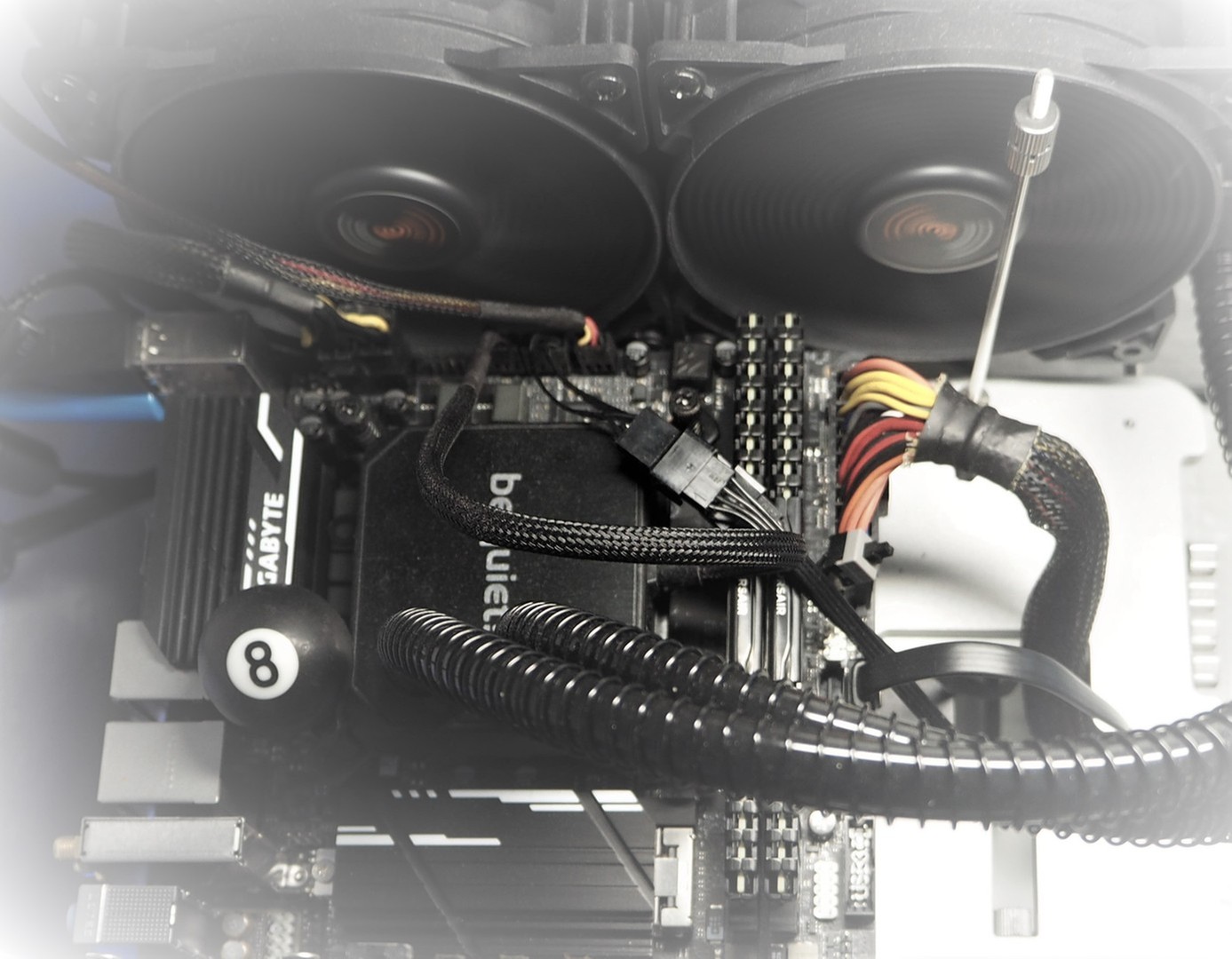 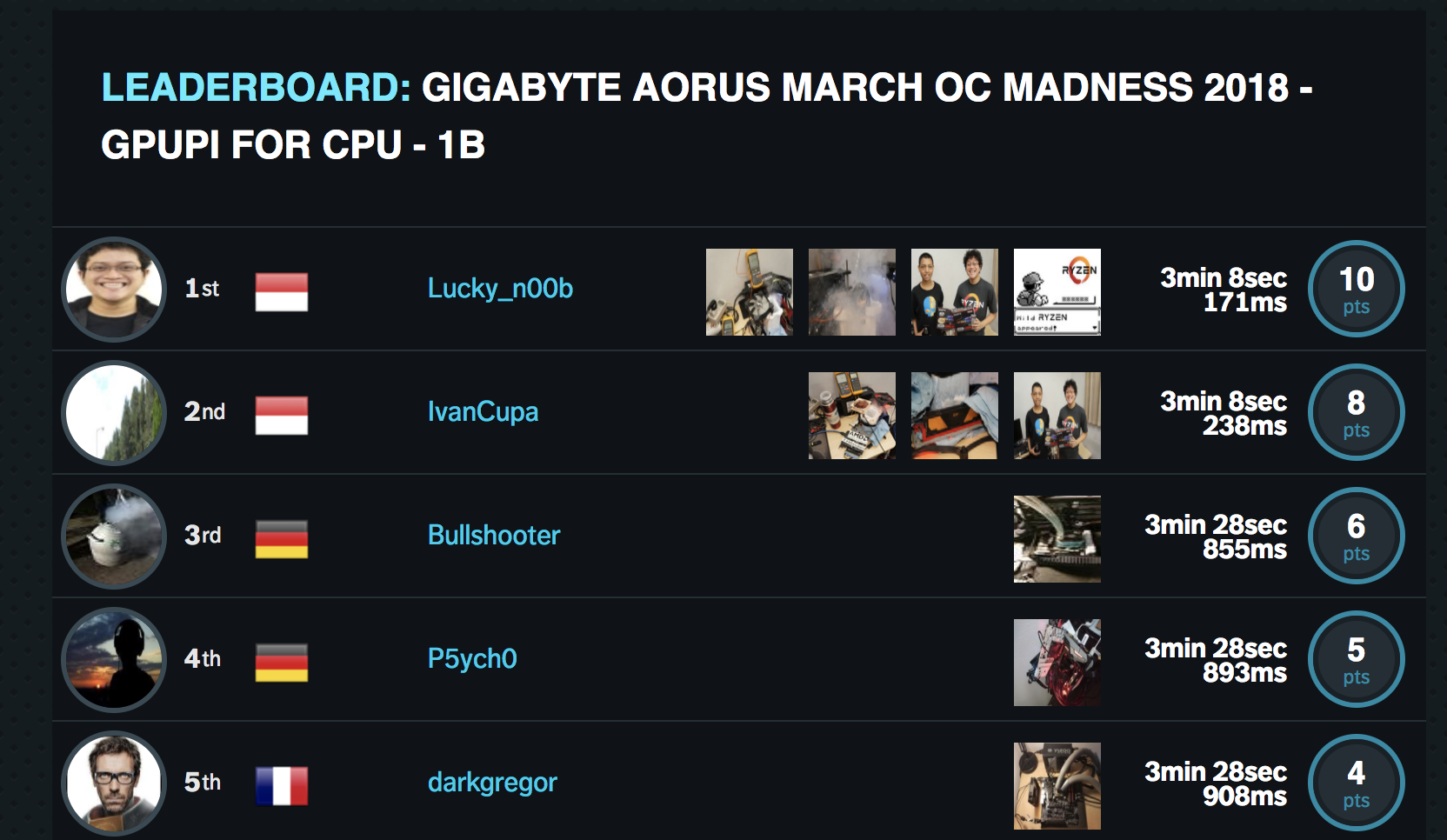 Here’s a shot of the rig used by Lucky_N00b. 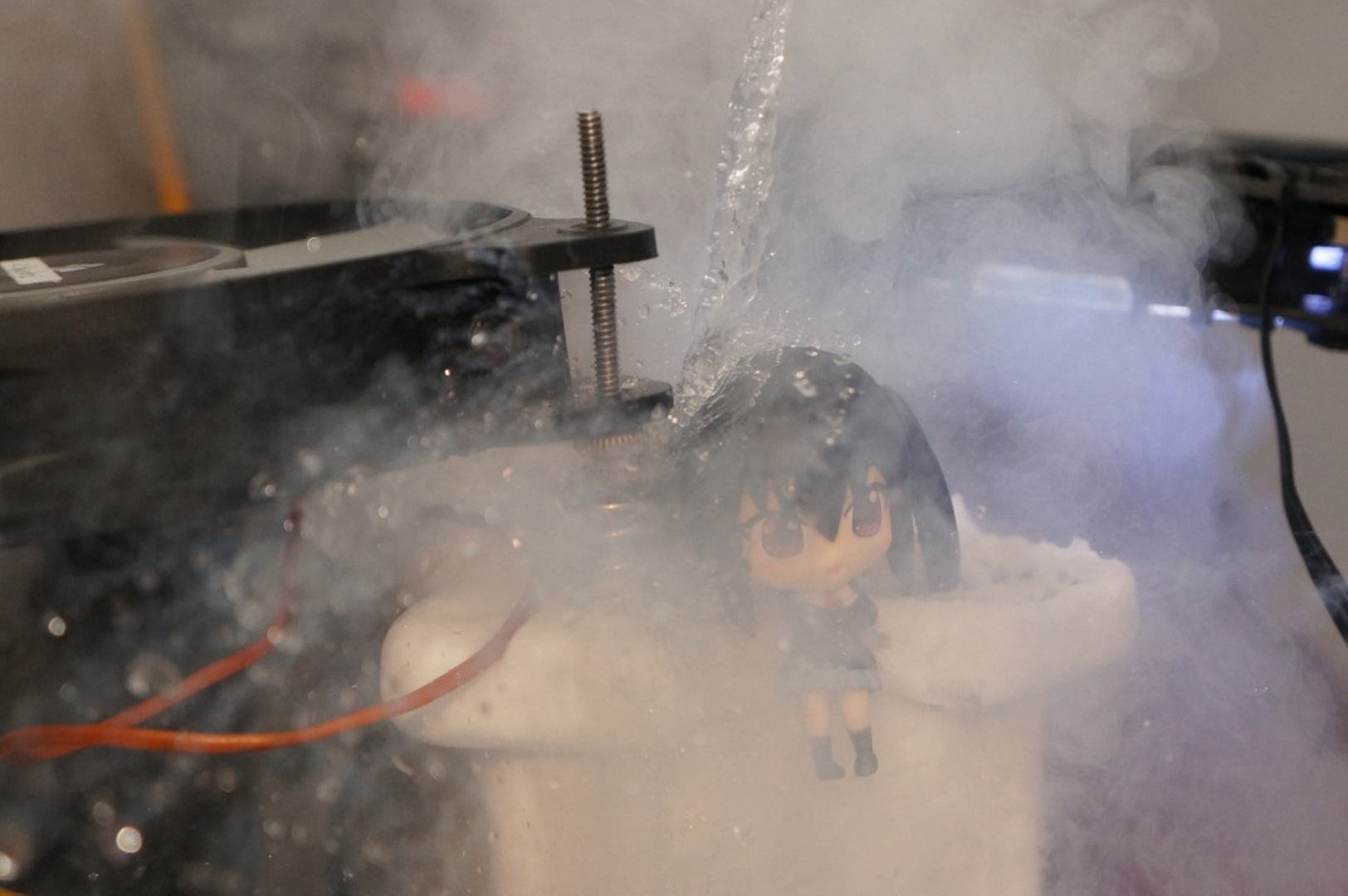 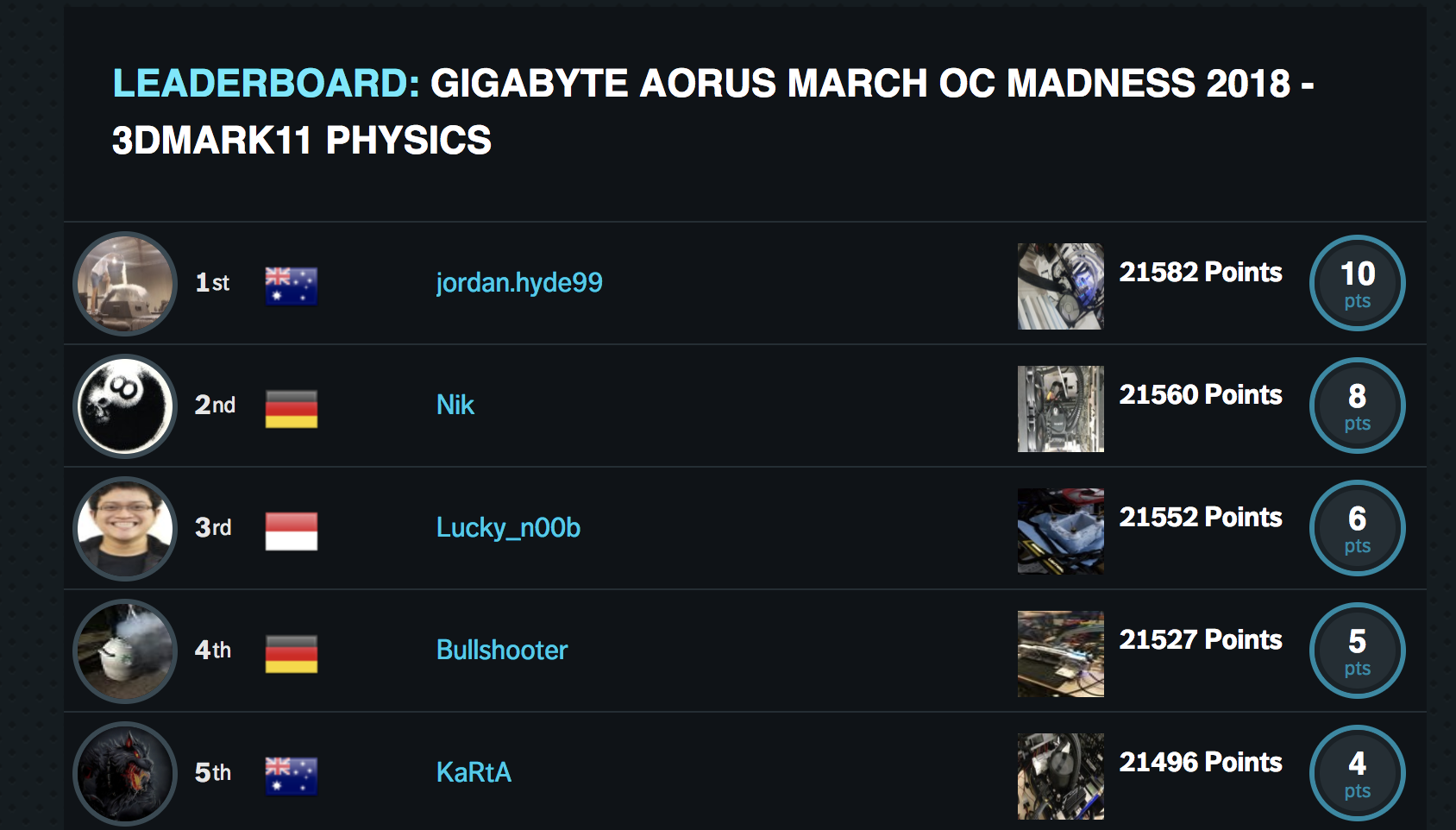 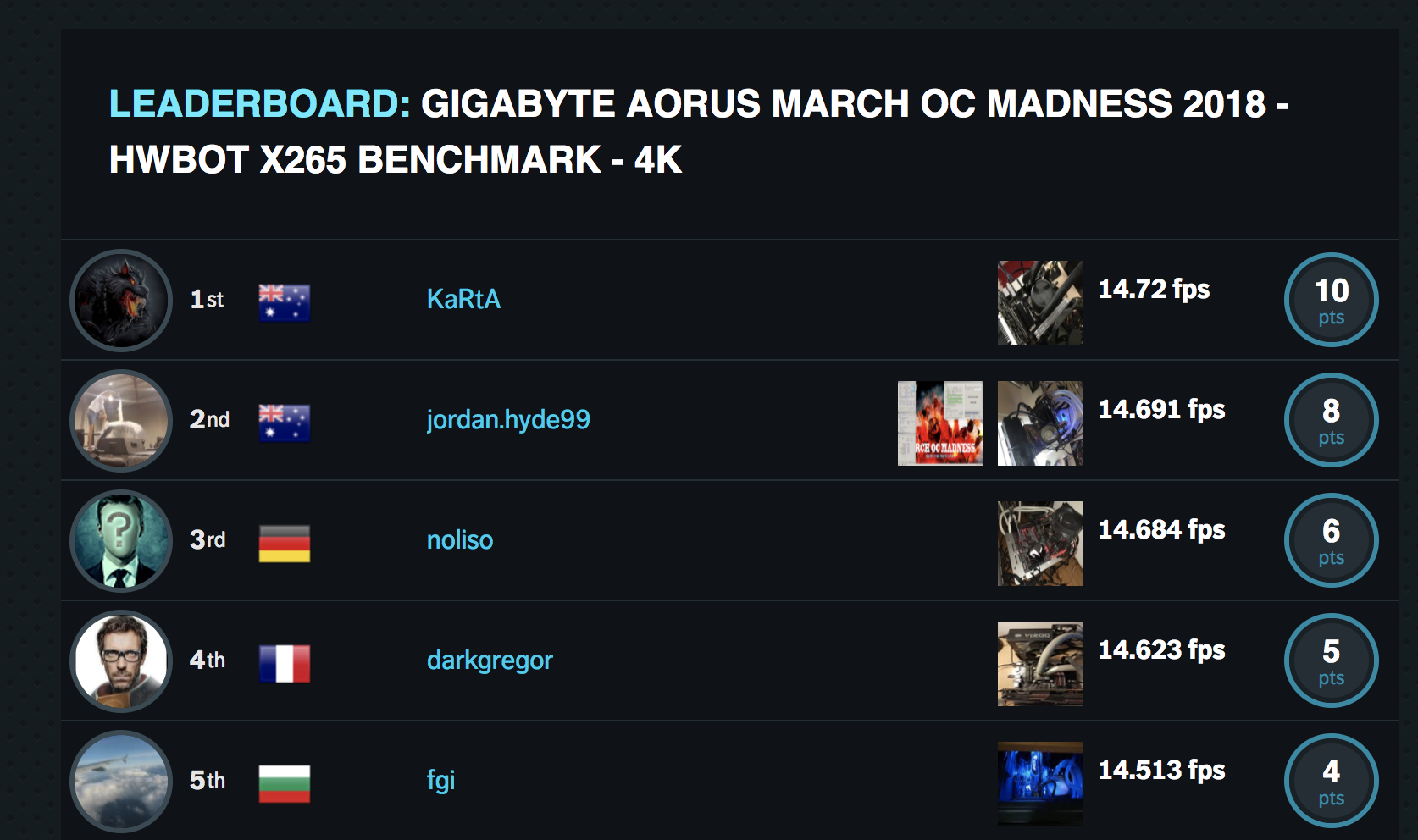 With one week to go, we find the top ten of the overall table for the GIGABYTE AORUS March OC Challenge to look like this: 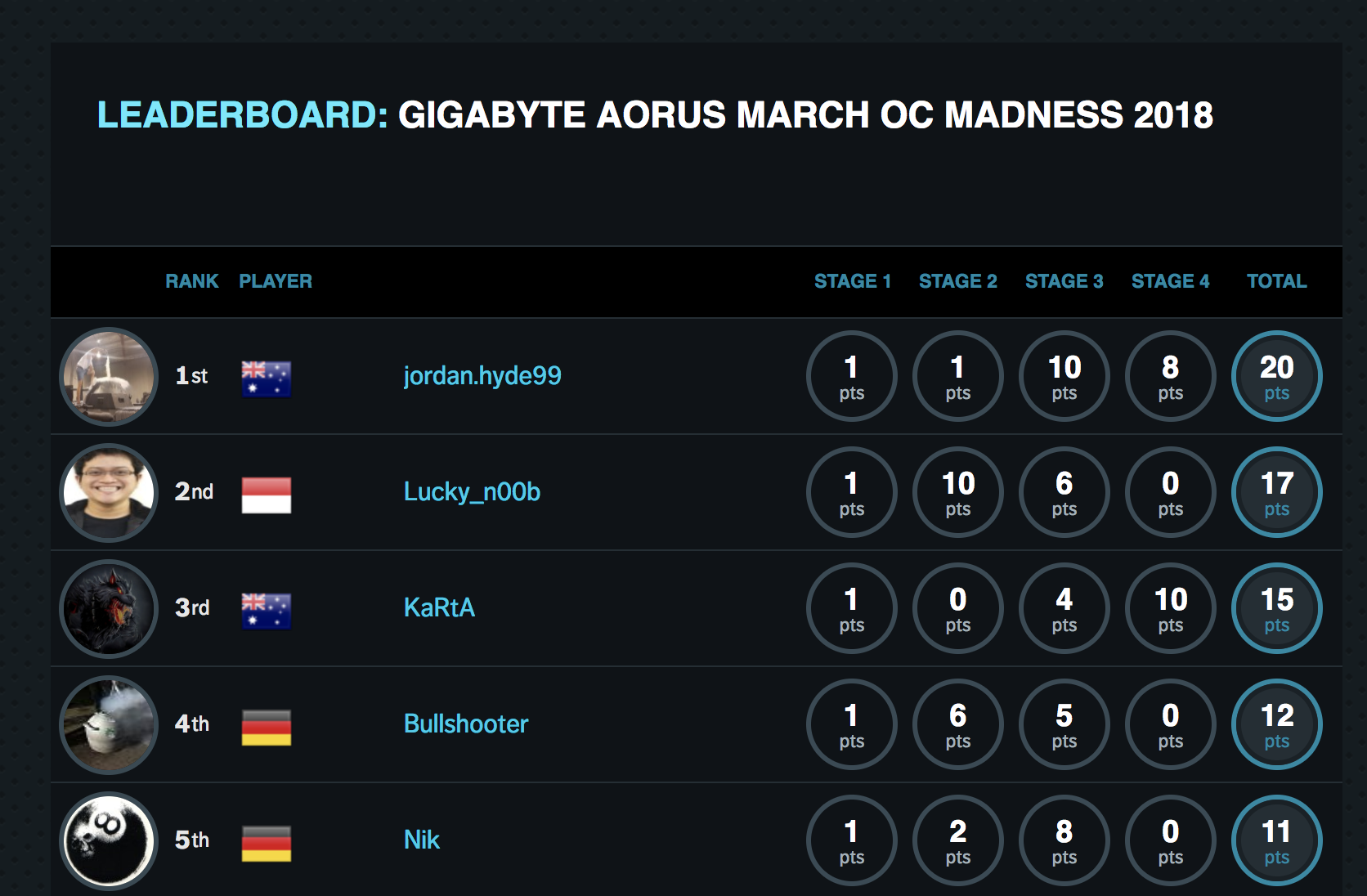 At this point jordan.hyde99 (Australia) is in a commanding lead at the top of the table, but he is not unchallenged. Bullshooter, Lucky_n00b and Nik still have a good shot at winning the competition, as they did not yet submit for the last stage. Let’s have quick look at the prizes on offer from GIGABYTE:


Check out the contest web page here and keep abreast of all the action in the final days: http://oc-esports.io/#!/round/gigabyte_aorus_march_oc_madness_2018

All scores moderated, make sure to use the latest 2.2 version for the last stage!!!!